Crazy hermit (by Manny)
Wise weasel (by Crash and Eddie)

Fighting with Rudy, being in the dinosaur world, the Herd, Diego

Rudy, the loss of his eye

Simon Pegg
Buck is one of the main characters of the Ice Age franchise. He's the tritagonist of Ice Age: Dawn of the Dinosaurs, a cameo character in Ice Age: Continental Drift, the deuteragonist in Ice Age: Collision Course and the titular main protagonist of his spin-off film Ice Age: Adventures of Buck Wild. He's an eccentric and crazy swashbuckling weasel that lost his mind after he finished in an underground world populated only by dinosaurs and acts like a soldier. He's the self-proclaimed protector of the Dinosaur World, the idol of Crash and Eddie, an adventurer, the archenemy of Rudy and an honorary member of the Herd. He's voiced by the famous British actor Simon Pegg in the movies while in the game he's voiced by James Patrick Stuart.

When Buck fell into the world of Dinosaurs, Rudy clawed Buck's eye out. So Buck made a run for it and climbed up a tree. He made an eye patch out of a leaf but then Rudy ate him. Just before Rudy could swallow him Buck grabbed hold of Rudy's uvula and swung back and forth until he shot right out of Rudy's mouth and claimed Rudy's Tooth.

Since then, Buck became an adventurer in the Dinosaur World and hunted the Dinosaur that cut his eye off which would soon become his arch-nemesis. During his time in the underground world Buck would soon lose his mind as he didn't have anyone to talk with and even married an "ugly pineapple" once.

Buck first appears when he saves Manny, Ellie, Diego, Crash and Eddie from a group of territorial dinosaurs throwing them a gas ball to allow them to escape.

Then Buck tells Manny and the group to go away as he thinks they will not last a minute in his world and refuses to help them even when they tell him that a friend of them was taken by a dinosaur declaring the friend died.

When Diego finds a foot track of the dinosaur Buck recognizes it and tells that he saw Momma T-Rex taking her three cubs and a "green sloppy thing" that Manny confirms as their friend Sid. Buck tries to advert them from the dangers of the Dinosaur World but Manny ignores him believing that he's just a crazy heremite.

Later, after Manny and Diego got swallowed by a carnivorous plant, Buck saves Manny and Diego after Ellie convinces him since he was still mad about them ignoring his advertiments earlier. Buck kills the plant and frees the duo with Ellie asking Buck to help them find Sid. Buck agrees with some rules.

During the travel, Buck tells Crash and Eddie that his archenemy, a giant Baryoyx named Rudy, will probably find them as he "sees all, eats all, finds all". Even though Diego is initially charmed by Buck's lifestyle he changes his mind when Buck talks to a rock using it like a phone.

The group then arrives to the Chasm of Death, a place full of gas that makes everyone that goes in there laugh until death. In fact Manny, Diego, Crash and Eddie starts to laugh to death when their voices gets high pitched by the gas. Buck tries to warn them to not laugh but he gets his voice high pitched which makes him laugh to death too forcing Ellie to save them all.

At night, Buck and the rest of the Herd stops for the night with Buck telling the story of how he met Rudy and he lost his eye. When everyone sleeps, he makes the guard.

The next day, Buck and the Herd are walking towards the Lava Falls where Sid is but they gets attacked by Guanlongs that separates Manny, Diego, Buck, Crash and Eddie from Ellie that starts to give birth to their baby right there. Buck, Crash and Eddie go to save Sid while Manny and Diego protect Ellie from the Guanlongs.

Buck, Crash and Eddie uses a Pterodactyl to save Sid but they're chased by carnivorous flying dinosaurs that gets defeated when they fall in the lava. They successfully save Sid right before he could die with the sloth complaining that he couldn't say goodbye to his kids.

After arriving, Buck assists to Peaches' birth and says that he forgot what it was like to have a family before telling to the Herd that it's time he brings them back to home.

Sadly, before he can take the Herd back to home they're attacked by Rudy that still wants revenge on Buck and chased Sid earlier. Thanks to Buck's plan they succeed to bond Rudy until Sid accidentally screws it up even though he's saved by Momma T-Rex that apparently kills Rudy by pushing him off the cliff.

Apparently with no purpose in his life now, Buck asks what he will do after Rudy's death with Ellie offering him to join their Herd and coming to the surface world with them with Buck agreeing after a moment of hesitation.

Buck says goodbye to Rudy's tooth but then he beards Rudy roaring and discovers that he's alive. After telling Diego that his place is down there he says goodbye to the tiger and cuts the bridge that allows to anyone to go to the Dinosaur World in order to prevent any misluck animal to fall there and he goes to Rudy.

The family goes back in the surface and they put Buck in their family picture showing that he's an honorary member of the Herd now while Buck rides Rudy in the Dinosaur World happy to be right where he belongs.

When Scrat is falling to the center of Earth he passes from the Dinosaur World and there he sees Buck still riding Rudy, much to the Baryoyx's frustration.

Buck returns and helps them to stop a deadly asteroid that is heading towards Earth. After their victory, Buck is seen at Peaches' wedding with a pumpkin named Bronwyin that he adopted during the film. Whether or not he remains in the valley it's currently unknown. Due to how controversial the movie turned out to be between the Ice Age fandom, it's not considered canon. 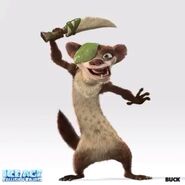