Cosmic Scrat-tastrophe is a computer-animated short film starring Scrat. It is the 6th short film in the Ice Age franchise. It was released with The Peanuts Movie. on November 6, 2015, and was set as an extended sneak peek of Ice Age: Collision Course.[1]

After he causes Scratlantis to be sucked down the plughole, Scrat wanders through the landscape with a new acorn in hand. Inadvertently, he falls through into a cave and spots a place to stick his acorn in. Upon placing it, the whole cave melts, revealing that he is inside a spaceship (resembling the one inside the ice cave's walls in the first film). Scrat confusing pulls the leaver that the acorn is on only for the ship to suddenly take off, the ship zooms into space and crashes into the Moon, causing it to hit several other planets causing them to bounce around and bump into each other as if they were billiard balls (the Moon is the cue ball) that ends up forming the Solar System which incidentally gives two planets new appearances (Jupiter's Great Red Spot is formed when Mars bumps into it, leaving a red splotch-like bruise on its surface; while Saturn is bumped into its rings as if it were a billiard ball falling into a pocket), as well as causing a green planet to be shot off into space and toward some constellations and two more extra planets to collide with each other, shattering both worlds and forming the Asteroid Belt..

Scrat manages to slow the ship down and is amazed at the "new world" he's in, until one of his tears accidentally reactivates the spaceship. After spotting a rock-like meteoroid ahead, he dones a spacesuit along with his acorn, venturing out towards the surface of the planet. He and the acorn then get tied on to the front of the spaceship while it crashes on the planet, causing Scrat to land on the other side of the planet. Scrat then joyfully places his acorn into the ground and salutes in delight, however, the surface cracks and gives way, causing Scrat to get stuck in his own space helmet after being pulled by the spaceship and holding on to the acorn. Prying himself off, he then watches as half of the asteroid begins to head towards Earth. Scrat, in embarrassment and relief, floats away offscreen after his suit breaks away.

Back on Earth, Manny, Sid and Diego spot some meteors flying overhead. Thinking they are shooting stars, Sid asks for Manny to quickly make a wish. One meteor catapults him into a tree and then burns him as he claims his "marshmallows" are burnt.

A fifth Scrat short film titled Scrat: Spaced Out set during the climax of Collision Course was released on DVD in 2016. Despite being a midquel to the film, the short is also technically a sequel to Cosmic Scrat-tastrophe. In this short Scrat and his acorn are captured by an evil group of alien female squirrels named Scratazon. 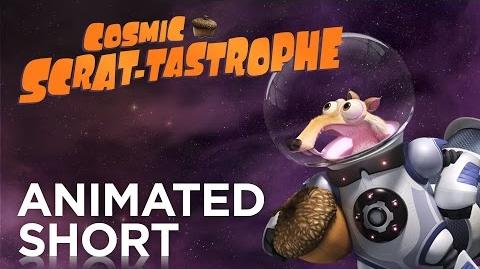