This article is about the character, if your looking for the movie, see: Ferdinand (film)

This article is a stub. You can help Blue Sky Studios Wiki by expanding it.

Smelling flowers, light breezes, and sitting under the cork tree

Fighting, being bullied, hurting others, and something bad happening to others including flowers

John Cena
Colin H. Murphy (Young)
Ferdinand is the protagonist of the film with the same name, Ferdinand.

He is voiced by John Cena as an adult and Colin H. Murphy as young age.

Ferdinand is the biggest bull around, his hefty built giving him the appearance of a dangerous fighting bull. Sporting shiny, smooth black fur, dark brown hair, Ferdinand also has a beige snout and a pair of white horns. He has blue eyes, surrounded by tan rings, and a small tuft of dark brown fur on the top of his head. His built, composed of a large and muscular chest and smaller rump, makes him seem like the perfect bullfighter.

When he was a calf, Ferdinand was much scrawnier and smaller. He had shorter stubby horns, slight buck teeth, and large ears and often wore an excitable expression. Two short locks of fur stand on top of his head.

Ferdinand, contrary to the beliefs of others in the film, is a pacifist by nature. He enjoys calm and peaceful activities such as sniffing flowers and walking along the streets of Spain. He hates violence, which explains his aversion to bullfighting. He has been seen desperately trying to resuscitate a bunny whom he thought he had killed, only to fail miserably. And he is also known as friendly, even-tempered, respectful, dependable, independent, nice, adventurous, nurturing, determined, caring, humble, athletic, responsible, astute, courteous, thoughtful, emotional and romantic.

A truly lovable bull, he exhibits his big heart and love for people, which is often displayed as adorable awkwardness, curiosity and clumsiness. Such can be seen as he peeks from behind some balloons and gazes lovingly at Nina and his constant awe and wonders at everything as he travels around Spain. This clumsy bull goes to the flower festival in town but after getting stung by a bee, he accidentally destroys part of the town (including a local china shop).

Days in the Casa

Ferdinand and his father, Raf, were from the Casa del Toro, the latter a fighting bull. On a particular day, while Valiente, Guapo and Bones were practicing bullfighting in a pen, Ferdinand emerges from behind a door with a bucket of water and makes his way, without getting seen or entangled in their fight, to a little red flower in the pen. He affectionately speaks to it and waters the plant gently before taking a long sniff.

A truck, which Valiente names the "Winner's truck", backs into the pen and Ferdinand asks what it is. Valiente replies with a snort, claiming that he knows nothing and proceeds to explain that the truck indicated that the matador would pick a bull to fight in Plaza de Toros. The other bulls start fighting and bragging and Bones is pushed to the ground. Concerned, Ferdinand helps him up, only for the other bull to reject his aid.

During this, Valiente spots his flower and starts mocking him. Ferdinand is challenged to a fight but he refuses, remarking that Valiente can hit him but not the flower. Confused and taken aback, Valiente leaves.

Soon, the adult bulls charge out to display their fighting. Ferdinand and the other calves cheer for their father. When Ferdinand's father, Raf, wins over his father, Valiente scoffs and leaves Ferdinand's side. As they trot back to their own pen, he witnesses Valiente's father dismiss his son furiously.

Ferdinand trots up to Raf gleefully and the latter greets him by tossing him onto his back. He proceeds to talk about fighting for glory in the Plaza and that one day, Ferdinand would be a better fighting bull than him. Bashfully, Ferdinand expresses his reluctance for either of them to fight and asks if he could still win without fighting, to which Raf gently tells him that he wished life would be like that for Ferdinand. He promises to return, pressing his forehead against Ferdinand's and Ferdinand watches as he boards the truck.

He returns to his pen, only to see fuming Valiente trample his flower and leave with his father.

Ferdinand showed concern for his father in relation to him to fight against El Primero, but Raf assured him that he would return and so Ferdinand did not sleep waiting for his father to return.

When the truck that took him back, he excitedly waits for him, but when he discovers that his father was defeated, very sad, escapes from there. 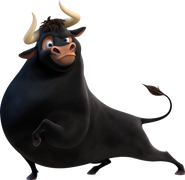 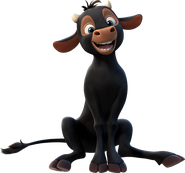 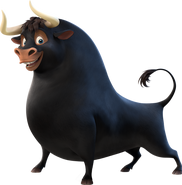 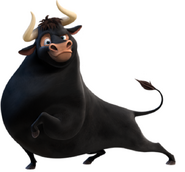 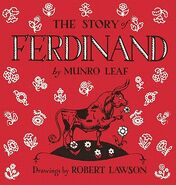