Horton Hears a Who!

Horton Hears a Who! (also known as Dr. Seuss' Horton Hears a Who!) is a 2008 American computer animated musical film adventure comedy film based on the book of the same name by Dr. Seuss, produced by Blue Sky Studios and distributed by 20th Century Fox. Directed by Jimmy Hayward and Steve Martino in their directorial debuts, the film's screenplay was written by Cinco Paul and Ken Daurio, and features the voices of Jim Carrey and Steve Carell as Horton the Elephant and Mayor Ned McDodd, respectively, alongside Carol Burnett, Will Arnett, Seth Rogen, Isla Fisher, and Amy Poehler. John Powell composed the film's music.

The film was released and grossed $297 million on a budget of $85 million. Horton Hears a Who! was the third Dr. Seuss feature film adaptation, the first adaptation to be fully animated, and the second Dr. Seuss film starring Jim Carrey after How the Grinch Stole Christmas (2000).

In the Jungle of Nool on the fifteenth of May, a caring, imaginative teacher elephant named Horton, the jungle's nature teacher,pushes a whole tree, takes a dip in the pool. A dust speck floats past him in the air, and he hears a tiny yelp coming from it. Believing that an entire family of microscopic creatures are living on that speck, he places it on top of a pink, fuzzy clover that he holds in his trunk. In fact, he finds out the speck harbors the city of Who-ville and all its inhabitants, led by Mayor Ned McDodd. He has a loving wife, Sally, 96 daughters who all have names that start with the letter H, and one son named JoJo, who, by Who custom, is next in line for the mayoral position.

JoJo does not want to become mayor, which leads him to become sullen and mute, despite Ned's giving him extra attention. The Mayor finds out from Dr. Larue that Who-ville will be destroyed if Horton does not find a So Horton resolves to place the speck atop Mt. Nool, the safest place in the jungle. This outlook earns Horton nothing but ridicule from the inhabitants of Nool, especially from the strict official of the jungle, the Sour Kangaroo, who tries to get Horton to give up the speck, so as not to put supposedly ridiculous ideas into the heads of the children. Ever faithful to his motto, Horton refuses.

Also taking force toward Horton are the Wickersham brothers, a group of angry bullying monkeys who love making misery. All the small incidents that Horton experiences on his trek across the jungle have a catastrophic effect on Who-ville. He almost falls off a rickety bridge over a gaping chasm with a river of dangerous saltwater crocodiles at the bottom, which causes a dentist's needle to accidentally slip into the Mayor's arm while getting a root canal. When Horton left the clover outside overnight, it frosted over, which created winter in the summer down in Who-ville which gone away thanks to Horton's massive breath. As the other Whos become suspicious, the Mayor finally reveals the truth, but at first, the Whos do not believe him any more due to the Chairman than the animals believe Horton. In the meantime, the Kangaroo has enlisted a nefarious buzzard named Vlad Vladikoff to get rid of the speck by force.

Vlad manages to steal the clover with the speck on it, flee from a chasing Horton and drop it from hundreds of feet into a valley full of nearly identical clovers, to show what the wind means in Whoville. The impact nearly demolishes Who-ville like an earthquake. Horton painstakingly picks 2,999,999 clovers through the field and finally finds it The earthquake, combined with hearing Horton's voice through the drain pipe, is enough to convince the rest of the Whos that the mayor is not crazy, and they all tell Horton they believe in him. The Kangaroo finds out that Horton still has the speck, and, as her patience completely runs out, organizes a mob by telling lies to get rid of the speck once and for all. The animals plan to rope and cage Horton, but the Kangaroo turns this into a chance for attention, and offers Horton an ultimatum: give up the speck and he was wrong and that she was right, or pay the price. Despite a heartfelt speech from Horton that clearly touches the animals, Kangaroo still takes this refusal as an insult to her authority, orders them to proceed, and drop the speck into a pot of boiling beezlenut oil too.

The Mayor enlists all of his people to make noise by shouting, as well as playing a variety of instruments, so the animals can hear them. JoJo runs off to Who-ville's abandoned Star-Studying Tower and soon Ned takes off after him. Inside, he reveals his ingenious invention: the Symphony-Phone, a giant machine that serves as an orchestra, and proceeds to add it to the mix of sounds. Still, the sound is not loud enough. The animals do not hear anything and the Kangaroo, who has had Horton caged, takes the clover, holds it over the oil and releases it. In a last-ditch effort to make Whoville heard, JoJo grabs the horn used to project Horton's voice, runs up the highest tower and yells A sound wave emerges and ripples up to the already pressured clouds and collides with them, causing the clouds to break and the sound to come through. Hearing the Whos' cries, Rudy, the Kangaroo's son, grabs the clover before it hits the oil and returns it to Horton, refusing his mother's orders to return to her pouch. The animals finally realize the atrocity they almost committed. The Kangaroo is miserable for her behavior, but Horton forgives her, and offers his friendship, which the Kangaroo accepts with the umbrella. At the end of the film, everyone helps Horton carry the speck up to the top of Mt. Nool. After a big number of the cast singing REO Speedwagon's, the camera zooms out, revealing that along with numerous other worlds in our universe, the jungle of Nool is just one speck among numerous others like our planet.

As of May 8, 2008, the review aggregator Rotten Tomatoes reported that 78% of critics gave the film positive reviews, based on 123 reviews, and an even better 84% rating from the top critics on the site based on 31 reviews, both classifying the film as, and making it by far the most favorably reviewed Dr. Seuss film adaptation on the site. This makes it the most and, as of 2008, only critically successful film based on a Dr. Seuss book.

Metacritic reported the film had an average score of 71 out of 100, indicating, based on 31 reviews, also the most favorably reviewed Dr. Seuss film on the site.

Brian Eggert of Deep Focus Review gave it a negative one and a half stars out of four, criticizing its numerous pop-culture references, calling it a and claiming it ends up

The film had the 4th largest opening weekend in March, behind only Ice Age, Ice Age: The Meltdown, and 10 000 B.C..

This makes it the first theatrical film in 2008 to pass the $100 million domestic mark. 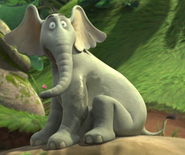 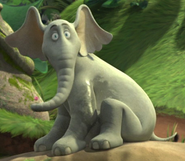 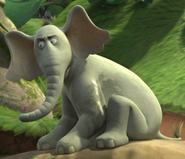 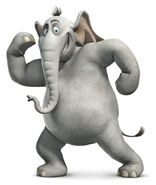 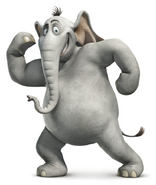 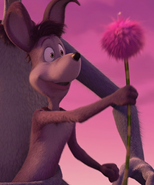