Ice Age: Dawn of the Dinosaurs is the fifth feature film made by Blue Sky Studios third and the second sequel to Ice Age.

It was produced by Blue Sky Studios and released by 20th Century Fox.

It was released in theatres July 24, 2009 with a sneak preview shown nationwide at selected theaters on Father's Day in the USA.

This is the first Ice Age film to be released in digital 3D.

Despite receiving mixed reviews from critics, audiences enjoyed the film and it went on to become a massive blockbuster success, grossing $886 million worldwdide against it's $90 million budget.

It remains as the highest-grossing film in the franchise so far.

Scrat now is having fun playing video games, but is distracted by the crow, which makes him transport back in time 20,000 years ago only to find a possible romance in a female saber-toothed squirrel named Scratte.

After the events of Ice Age: The Meltdown, Manny and his new wife Ellie are expecting a baby, which leaves Manny anxious to ensure that everything is perfect for when his baby arrives.

Diego is fed up with being treated like a house-cat and ponders the notion that he is becoming too laid-back.

He eventually leaves the herd.

Sid begins to wish for a family of his own, and so steals some dinosaur eggs which leads to Sid ending up in an underground world where dinosaurs roam free, and where his herd must rescue him, while dodging dinosaurs and facing danger left and right, and meeting up with a weasel known as Buck who hunts dinosaurs intently and has a mammal chauvinism.

Ellie and Manny are expecting their first child, and Manny is obsessed with making life perfect and safe for the family.

He is shown bringing a shell full of water to Ellie believing that she is giving birth, although this is just a false alarm.

At the same time, Diego finds himself unable to catch an antelope he has been stalking.

The antelope starts to taunt him.

Believing that he is losing his predatory nature as a tiger, he decides to leave the herd after a talk with Manny. Sid grows jealous of Manny and Ellie and three apparently abandoned eggs that he finds in an icy underground cavern.

Manny tells him to put them back, but Sid instead looks after the eggs, which hatch into baby Tyrannosaurus the next morning.

Although Sid tries his best to raise the three dinosaurs, their rambunctious behavior scares away all the other animals’ young and ruins a playground Manny built for Ellie’s baby.

The mother dinosaur soon returns and carries both Sid and her youth underground, with Diego in pursuit. Manny, Ellie, Crash, and Eddie follow as well and discover that the icy cavern leads to a vast jungle populated by dinosaurs thought to be extinct.

Here, an Ankylosaurus threatens the herd despite Diego’s efforts to fend it off; they are saved from a further crowd of angry reptiles by a one-eyed, slightly crazed weasel named Buckminster, or Buck.

Buck has been living in this jungle for some time and chasing Rudy, intending to avenge the eye he lost to it.

He agrees to lead the herd through the jungle’s perils to Lava Falls, where has taken Sid and her babies.

Soon journeying in the jungle, Manny and Diego are captured by a carnivorous plant, but thanks to Buck, they are freed.

The herd travels across the chasm of death.

In the meantime, Sid and the mother try to outdo each other in feeding the offspring; he loses this contest, but is soon welcomed into the family regardless.

That night, while the herd was resting Manny had a nightmare of Ellie alone in a jungle and being killed by Rudy.

After he wakes up, Ellie was still sleeping; however, she woke up, too, and Manny explains to her about his nightmare.

Because Ellie was in the nightmare, she explains the most dangerous place in the world is bigger than her and Manny.

Buck hears that if Manny was nicer to Sid, they wouldn't be searching for him.

Buck says that Manny risked his own life and his unborn baby.

That makes Manny a friend and a hero.

Rudy attacks the family and Sid is knocked onto a loose rock slab that is floating on a river of lava and about to plummet over the falls.

As the herd moves toward Lava Falls, Ellie goes into labor and a Guanlong pack strikes, causing a rock slide that separates her from Manny and Diego.

Manny doubles back to protect her and Diego fends off further attacks.

Buck takes Crash and Eddie ahead to rescue Sid riding a pteranodon over to lava falls but are attacked by a group of Quetzalcoatluses.

The flock forces Buck to detour, where Crash and Eddie then fend off the predators before heading to back Sid.

Just as the sloth goes over the falls, the trio swoops in and saves his life.

Manny reaches Ellie just as their baby is born.

A girl they decide to name Peaches.

After, the whole herd is reunited with Buck and the rest flying back from lava falls.

Sid is saddened at the fact that he never had a chance to say goodbye to children as he is reunited with the herd.

Before they can exit the jungle, Rudy attacks at full force; Buck helps the others ensnare him briefly, but he escapes and resumes his onslaught.

The herd is saved by the timely arrival of Momma, who charges at Rudy and knocks him off a cliff.

As she and her children wish Sid well, Buck – now without a purpose in life since Rudy is gone – decides to join the herd and live on the surface.

However, a distant roar tells him that Rudy is still alive.

Buck changes his mind and sends the herd home, he destroys the path to the underground jungle at the same time so that no one can go down there.

Manny and Ellie welcome Peaches into their frozen world and admit that Sid did a good job looking after Momma's children.

Diego decides to remain with the herd, while Buck stays where he wants to be: underground, matching wits with Rudy.

The herd is back on the surface and the movie ends.

Unlike the previous Ice Age films, Scrat is now having fun playing a video game called Ed Hunter, but is distracted by the crow, which makes him bite it only to get thrown into a microwave and transported back in time 20,000 years ago.

His efforts are complicated by the presence of Scratte, a female of his species, with whom he is instantly smitten.

Scratte outsmarts him a number of times, once by demonstrating her ability to glide like a flying squirrel, but the two eventually fall in love after Scrat saves her from falling to her death in the lava river.

He even chooses to focus his attention on her instead of the acorn until the end of the film, when he tires of her finicky nature and reverts to his old ways.

The ensuing fight between the couple leads to a volcanic explosion that hurls Scrat and the acorn back to the surface, leaving Scratte trapped underground.

As Scrat is about to enjoy his acorn, though, a stray piece of ice falls on him and knocks it back into Scratte’s hands.

However, he realizes that he doesn't need acorn anymore, so he tries to look around for his way back to 2008.

The end credits are shown.

Rumors about a third Ice Age film started when Ice Age: The Meltdown's DVD said in the director commentaries that there was probably going to be made a third movie called. It wasn't until January 30, 2007 when Fox president Hutch Parker, based on the box office success of Ice Age: The Meltdown, announced and approved a third film.

The movie is considered to be the biggest blockbuster this summer, with only Transformers: Revenge of the Fallen and Harry Potter and the Half-Blood Prince rivaling it.

Blue Sky decided to do in the third Ice Age installment, and added the dinosaurs to the story.

Character designer Peter de Sève welcomed the new plot addition, since he could not think of any other giant mammal to put into the story.

The approach led to colorful dinosaurs, because, according to de Sève. Rudy's design was inspired by the Baryonyx because of his crocodile-like look, which de Sève considered even more menacing than the T. rex.[1]

There are three others that have been released, with the third and fourth being the most closely resembling each other.

Queen Latifah recorded a cover of the song.

Unlike previous Ice Age films, Dawn of the Dinosaurs had an intense amount of adult jokes and violence situations.

This is a list of some/all of these kind of events.

It has a score of 50 on Metacritic citing reviews. [1]

However, Roger Ebert ultimately gave the film a three and a half star out of four review claiming that: Lou Lumenik of the New York Post awarded the film 3 out of 4 stars stating that the film is Keith Phipps of the A.V. Club graded the film a C+ claiming the sequel

While many praised the animation, some critics panned the flatness of the story and indifferent voice work.

The film's score by John Powell and the voice acting of Sid by John Leguizamo have been considered for the Annie Awards[2].

It reached approximately $42,500,000 on its opening weekend at #1, according to studio estimates, tying last week's champion Transformers: Revenge of the Fallen.

The actual grosses declared Revenge of the Fallen the victor between the two.

The film had its opening weekend on July between Harry Potter and the Half Blood Prince and The Cove.

It is currently the highest grossing 20th Century Fox film of the year.

The musical scores were done by John Powell who did the scores for the previous movie.

Queen Latifah's cover of Walk the Dinosaur was used to promote the movie though it doesn't appear in the soundtrack.

The movie was rated PG for some mild rude humor and peril, as seen on the back of the DVD and Blu-Ray disc of the movie. 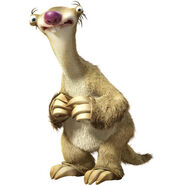 Add a photo to this gallery

[[Ca[[Category:20t [[Category:Films not to have any humans
Retrieved from "https://bstudios.fandom.com/wiki/Ice_Age:_Dawn_of_the_Dinosaurs?oldid=25463"
Community content is available under CC-BY-SA unless otherwise noted.