Ice Age is a 2002 computer animated comedy drama road trip film directed by Chris Wedge and Carlos Saldanha and is the 1st feature film produced by Blue Sky Studios and distributed by 20th Century Fox. It is the first installment of the Ice Age franchise.

The film focuses on a grumpy woolly mammoth named Manny, a talkative and goofy ground sloth named Sid, a navigating and smartest macrauchenia named Samson and a sinister and mysterious sabretooth tiger named Diego attempting to return a lost human baby to its tribe.

The film was positively welcomed from audiences and film critics alike with praising for its story, its characters, humor, voice cast performances (especially those of Leguizamo and Leary), heart, Newman's score, the climax and the message with many calling it one of the best animated movies ever made. It was even nominated for the Academy Award for Best Animated Feature.

It was also a box office success, grossing $176 million in the domestic market and earning a worldwide total of $383 million.

A saber-toothed squirrel named Scrat is trying to find a place to store his prized acorn for the winter. Eventually, as he tries to stomp it into the ground, he causes a large crack in the ground that extends for miles and miles and sets off a large avalanche. He barely escapes, but finds himself stepped on by a herd of prehistoric animals and remains stuck under the foot of a male Macrauchenia that steps on him at every step he makes, much to his dismay. The animals are trying to avoid the ice age by migrating south. Sid, a clumsy ground sloth left behind by his family, decides to move on by himself but is attacked by two Brontops whom he angered by ruining their meal. Sid is soon saved by Manfred ("Manny"), an agitated mammoth who fights them off and is heading north. Not wanting to be alone and unprotected, Sid follows Manny. Meanwhile, Soto, the leader of a Smilodon pack, wants revenge on a group of humans for killing half of his pack, by eating the chief's baby son, Roshan, alive. Soto leads a raid on the human camp, during which Roshan's mother is separated from the rest and jumps down a waterfall when cornered by Soto's lieutenant, Diego. For his failure, Diego is sent to find and retrieve the baby.

Later, Sid and Manny spot Roshan and his mother near the lake, having survived her plunge. The mother only has enough strength to entrust her baby to Manny before she disappears into the water. After much persuasion by Sid, they decide to return Roshan, but when they reach the human settlement, they find it deserted. They meet up with Diego, who convinces the pair to let him help by tracking the humans. The four travel on, with Diego secretly leading them to his pack for an ambush. Sid's Mud Bath with two girls.

After encountering several misadventures on their way, they reach a ice cave Manny, Sid, And Diego's Wilde Ride Frozen Water Slide Chase with several cave paintings made by humans. There Sid and Diego learn about Manny's past and his previous interactions with the human hunters, in which his wife and child were killed, leaving Manny a depressed loner. Later, Manny, Sid, Diego and Roshan almost reach their destination—Half-Peak, but encounter a river of lava. Manny and Sid, along with Roshan, make it across safely, but Diego freezes, about to fall into the lava. Manny saves him, narrowly missing certain death by falling into the lava himself. The herd takes a break for the night, and Roshan takes his first walking steps towards Diego, who starts to change his mind about his mission.

The next day, the herd approaches the ambush, causing Diego—now full of respect for Manny for saving his life—to change his mind and confess to Manny and Sid about the ambush. As the pair turn hostile towards him for setting them up, Diego asks for their trust because he's their only chance since they can't talk themselves out of the ambush. The herd battles Soto's pack, but despite their efforts, Soto's associates manage to corner Manny. As Soto closes in for the kill on Manny, Diego sacrifices himself by jumping in the way and is injured as a result. Manny then knocks a distracted Soto into a rock wall, causing several sharp icicles to fall onto Soto, killing him. Horrified, the rest of the pack retreat. Manny and Sid mourn for Diego's injury, which they believe is fatal, and continue their journey without him.

Soon, Manny and Sid manage to return Roshan to his tribe, and to their surprise, Diego manages to rejoin them, in time to see the baby leave. The group then begin to head off to warmer climates.

20,000 years later, Scrat, frozen in ice, ends up on the shores of a tropical island. As the ice slowly melts, the acorn is washed away. Scrat then finds a coconut and tries stomp it into the ground, only to mistakenly trigger a volcanic eruption.

Writer Michael J. Wilson stated on his blog that his daughter Flora came up with the idea for an animal that was a mixture of both squirrel and rat, naming it Scrat, and that the animal was obsessed with pursuing his acorn. The plan to have Scrat talk was quickly dropped, as he worked better as a silent character for comedic effect. The name 'Scrat' is a combination of the words 'squirrel' and 'rat', as Scrat has characteristics of both species; Wedge has also called him "saber-toothed squirrel." Scrat's opening adventure was inserted because, without it, the first real snow and ice sequence wouldn't take place until about 37 minutes into the film. This was the only role intended for Scrat, but he proved to be such a popular character with test audiences that he was given more scenes. The filmmakers made it so that many of the scenes with Scrat appear directly after dramatic moments in the film.

In a 2012 interview with Jay Leno, Denis Leary's character, Diego the Sabertooth Tiger, originally died near the end of the film. However, it was reported that kids in the test audience bursted into tears when his death was shown. Leary himself warned the producers that something like this would happen. When it was proven true, the scene was re-written to ensure Diego survived.

Originally, Sid the sloth was supposed to be a con-artist and a hustler, and there was even finished scene of the character conning some aardvark kids. His character was later changed to a talkative-clumsy sloth because the team felt the audience would have hated him. There was also an alternate scene of Sid in the hottub with the ladies which shows him saying to them "Let's jump in the gene pool and see what happens." One of the female sloths then kicks him in the groin. This was cut because it was not suitable for children and may have gotten the film a PG-13 rating. Other innuendos with Sid were also cut from the film. Sid was also supposed to have a female sloth named Sylvia (voiced by Kristen Johnston) chasing after him, whom he despised and kept ditching. All the removed scenes can be seen on the DVD.

The fat saber-tooth cat named Lenny was actually described as a scimitar cat in the film's Essential Guide book.

For mammoth Manny, the studio was initially looking at people with big voices.[1] James Earl Jones and Ving Rhames were considered, but they sounded too obvious and Wedge wanted more comedy.[2][3] Instead, the role was given to Ray Romano because they thought his voice sounded very elephant-like. Wedge described Romano's voice as "deep and his delivery is kind of slow, but he's also got a sarcastic wit behind it."[3]

When John Leguizamo was cast as Sid, he tried 30 different voices for Sid. After viewing a documentary about sloths, and learning that they store food in their mouths; this led to Leguizamo wondering what he would sound like with food in his mouth. After attempting to speak as if he had food in his mouth, he decided that it was the perfect voice for Sid.

All the actors were encouraged to improvise as much as possible to help keep the animation spontaneous.

The production team originally thought of turning the 20th Century Fox logo into ice when it appears before the film. Even though it can be seen in one of the trailers, they cut that out and placed the regular logo in the film, but pushed up a bit so it could only be seen in the bottom portion of it.

The drawings of characters during the end credit roll were all done by the children of the animators. The same is true of the picture that Sid draws of himself on a cave wall. Sid's drawing was done by 3 year old Will Shefelman, son of a story artist Dan Shefelman. The story artist working on the scene was having difficulty drawing like a 3 year old so he consulted an expert.

The film was released on March 15, 2002, and had a $46.3 million opening weekend, a large number not usually seen until the summer season, and way ahead of Fox's most optimistic projection of about $30 million.

Ice Age broke the record for a March opening and was the then-third-best opening ever for an animated feature—after Monsters, Inc. and Toy Story 2.

Ice Age was met with a positively feedback from audiences. Even though the film critics give it a nice rating they didn't praise it that much, however the audience often calls it one of the best animated movies ever made.

Both releases included a short film Gone Nutty, featuring Scrat from the film.

The film was released on Blu-ray on March 4, 2008, and beside Gone Nutty, it included 9 minutes of deleted scenes.[6] 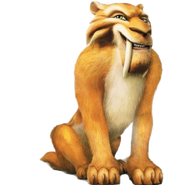 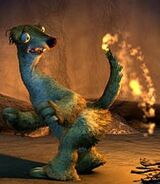