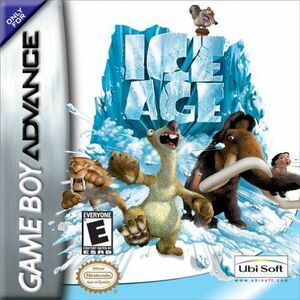 This article is about the video game, you may be looking for the film the game is based on.

Ice Age is 2002 platform game based on the film of the same name, published by Ubisoft and developed by A2M for the Game Boy Advance. The game was even a prize for Cartoon Network promoting the Ice Age: Frozen Fantasy Sweepstakes in 2002.

The game allows you to play as Sid or Manny (not counting Diego) with Roshan. The goal of each of the 10 levels is to collect as many nuts as you can and make it to the end safely.