Human/Pigeon (when having drank Walter’s serum)

Unknown (possibly 6 to 6.5 ft since he is taller then Walter Beckett)

Being Pissed Off, Walter's Gadgets(Formerly), Failing To Save The World, Being A Pigeon (Formerly)

Lance Sterling is the greatest spy the world has ever seen. He is a tall, dressed up man who is very confident and doesn’t listen to orders. He works for HTUV. He is voiced by Will Smith.

Lance has black hair and brown eyes, a dark tuxedo with a bow-tie, and very tight pants (so tight that it appears that his legs are thinner then his arms).

. He is a confident man who feels like he can do everything by himself. His catchphrase is “I fly solo.” 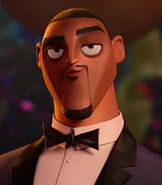