Amanda Seyfried
Mary Katherine (M.K. for short) is the main protagonist of Epic. She is a 17-year-old princess who was shrunk into the Leafmen world. She is voiced by Amanda Seyfried.

She was born on

M.K. Has red hair, green eyes, M.K.’s attire is a skirt over leggings paired with a pink hoodie.

Mary Katherine is a beautiful 17-year old princess. When she met a Leafman prince named Nod and falls in love with him.

M.K. met Nod while getting him back after he competed in a race. On a deer ride, they fall in love. When he made fun of her father, she got mad and she hit him. Before leaving Nod, she kisses him and becomes his girlfriend. 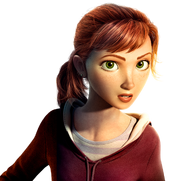