The film opens in a world of anthropomorphic robots, with Herb Copperbottom (Stanley Tucci), a dishwasher at Gunk's Greasy Spoon diner, racing through the streets of Rivet Town, elated that he is going to be a father. He and his wife, Lydia (Dianne Wiest), after 12 hours of "labor," finally manage to construct the baby. He is named Rodney Copperbottom (Ewan McGregor), and he becomes a young inventor who dreams of making the world a better place for everyone. Rivet Town Parade Rodney idolizes Bigweld, a master inventor and owner of Bigweld Industries. “You Can Shine No Matter What You’re Made Of” “See a Need, Fill a Need” During Rodney's adolescence, he invents a gadget, "Wonderbot", intended to help his father clean the dishes at the restaurant. Unfortunately this went down the drain When Herb's grumpy boss, Mr. Gunk (Dan Hedaya), unexpectedly confronts them, Wonderbot breaks dishes, causing Herb and Rodney to got into debt and to be fired. Rodney decides to take his invention to Robot City to see Bigweld and get a job as an inventor so that he can help his family. He is encouraged by his father, Rodney leaves who confides that he has always regretted not becoming a musician. Rodney arrives in Robot City and meets Fender Pinwheeler (Robin Williams), an old ramshackle robot scraping by through taking souvenir photos and selling maps to the stars' homes. After a harrowing ride on the crosstown express, Rodney arrives at the gate of Bigweld Industries. Tim The Gate Guard (Paul Giamatti)

There he learns that Phineas T. Ratchet (Greg Kinnear) has taken over Bigweld Industries and is about to discontinue the “Eye Of The Tiger” Theme Song manufacture of spare parts. “Why Be You When You Can Be New?” Ratchet and Cappy believes the company can make more profit if it stops making spare parts for older robots and focuses on selling more expensive upgrades. If any older robots protest they are sent to the underground Chop Shop, where they are shredded and melted down to upgrades by Ratchet's imposing mother, Madame Gasket (Jim Broadbent). Rodney is thrown out and finds a place to stay at Aunt Fanny's (Jennifer Coolidge) boarding house, along with an assortment of other older robots threatened with the Chop Shop. When the news gets out that spare parts have been discontinued by Bigweld industries, Rodney remembers Bigweld's slogan, "See a need, fill a need", and begins fixing old robots on his own. Upon learning of this financial threat, Gasket orders Ratchet to stop Rodney's work and kill Bigweld. Crank Clank (Draw Carey), Lug (Harland Williams), Piper Pinwheeler (Amanda Bynes)

Rodney finds that Herb has fallen ill, and can not find replacement parts. Rodney decides to try to contact Bigweld directly, so he can beg him to make spare parts again. Wonderbot reminds him that the annual Bigweld Ball takes place that night. Rodney and Fender go to the ball in disguise, Bigweld Ball Luau Dance Floor only to hear Ratchet announce that Bigweld was unable to attend. Rodney tries to confronts Ratchet by telling him that he spend days fixing outmoded, but is stopped by security guards. He is saved by Cappy (Halle Berry), a beautiful robot-executive of the company who dislikes Ratchet's scheme, and together with Fender and his new girlfriend, Loretta Geargrinder (Natasha Lyonne), they escape from the Bigweld Ball.

Fender walks Loretta home, but he is kidnapped and taken to the Chop Shop. He struggles to escape, losing his lower half in the process. Fender eventually escapes by reluctantly attaching a new pair of female legs. Meanwhile, Rodney and Cappy fly to Bigweld's home. When Rodney inadvertently knocks over a domino, Bigweld (Mel Brooks) appears. Rodney tries to convince Bigweld to return to the helm of his company and once again make spare parts available, but Bigweld refuses he convinced Rodney to give up. He explained that the world has moved on and that Ratchet had took over Bigweld Industries. The depressed Rodney calls his parents, intending to give up his ambition of becoming an inventor and return to Rivet Town, but his father once again encourages Rodney to pursue his dreams. Rodney rallies the Rusties into fighting back against Ratchet. Fender reveals that Ratchet and Gasket has built a fleet of super-sweepers with the intention of rounding up and destroying all older robots. Bigweld eventually decides to come with the group, having realized what he meant to Rodney.

The group heads for Bigweld Industries, where Bigweld fires Ratchet. Ratchet manages to beat Bigweld senseless and his security guards arrest him, but Rodney and Bigweld flee. Bigweld is repaired just as they enter the Chop Shop, but is captured. A desperate battle ensues between Ratchet's employees and Rodney's repaired robots. During the chaos, Bigweld is rescued by Rodney, the choppers and sweepers are destroyed, and Wonderbot kills Gasket by tapping her into the furnace, while Ratchet loses his upgrades, gets stuck on the ceiling with his father and being arrested by the CDA. Bigweld goes to Rivet Town to tell Rodney's parents that their son is now his right-hand inventor and eventual successor. Rodney makes his father's dream come true by giving him a three-bell trumpet, playing by sheer improvision that prompts the others to help add other musical tunes; Fender finds the new music to be a mix of Jazz and Funk - "Junk". The audience dances to James Brown's "Get Up Offa That Thing" as a victory celebration.

Theatrical release poster
Add a photo to this gallery 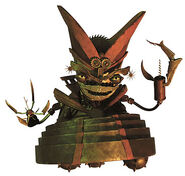 Add a photo to this gallery

Retrieved from "https://bstudios.fandom.com/wiki/Robots?oldid=26195"
Community content is available under CC-BY-SA unless otherwise noted.