Ferdinand (2017)
Spies in Disguise is an American 3D computer-animated buddy comedy film directed by Nick Bruno and Troy Quane. It is based on Lucas Martell's animated short Pigeon Impossible.

Ticktock, ticktock... a timer counted down the precise accuracy. "C'mon", a small voice said. The boy's tiny hand wiped sweet from his forehead, then went back to fitting steal tubes onto the metallic bands of a dime-store watch. Quickly, the screws spun into place as the screwdriver did its job. "Caaaaarrrrefulll... Careful." The boy's voice shook slightly as his hands delicately threaded wires through the tubes and beads. Then, with just a moment's hesitation, he clipped the wire. Reaching behind he, he pulled out an inflatable life jacket. Then, as if he was performing surgery, he used tweezers to gently life the CO2) cartridge out. At that crucial moment, he heard something.

"Walter Beckett, have you seen my tweezers?" The sudden sound startled Walter, who squeezed the CO2, catridge, causing it to go flying straight at her, shattering her coffee mug. His wom, wearing her police uniform, gave Walter the kind of patient look only a mother can bestow on her young son.

"Umm. Sorry, Mom. Did you need that mug?" Walter asked as the last of the coffee dripped from the broken bottom.

"What I need was the coffee inside the mug." Walter Beckett muttered before turning back to the true light of her life, her eight-year-old son, Walter, with his brown mop of hair covering this head, which seemed a little too big for his body. He'll grow into that big brain of his one day, Wendy often thought. She sat down opposite him, tossing the broken pieces of the mug into the trash. The room was filled with gadgets and tubes and discarded items Walter swore he could turn into scientific treasures that would one day change the world. Wendy never discouraged him, and made sure he had everything he needed as long as it was safe, of course.

"So, whatcha making, bud?" Walter's eyes grew large and stayed that way even as he pulled up his goggles, which snapped him on the forehead. "I'm glad you asked, because it's for you!"

"Me?" Walter nodded. A gadget for you to wear on patrol." Wendy leaned in closer as her son grew more excited.

"It's the perfect tool to keep you safe. Wanna see?" Wendy nodded as her son pulled out what appeared to be a mash-up of a watch and a bracelet, covered in buttons, that would cover half her forearm if she wore it. Walter launched into his presentation. "This button makes a really loud sound to incapacitate your enemy." He presses the button, and a high-pitched sound caused mother and sons to cover their ears. "Eeeeeeeeoooooowwaaaaaaa!!!" Walter exclaimed, switching off the contraption.

He caught his breath and turned back to this mom. "Like that." "Just like that would do the trick," Wendy said a little louder than normal, her ears still ringing. "This button will wrap you in an inflatable hug so nobody can hurt you. I'll let you try that out later. But this one..." His eyes widened as far as they could go, as did his smile, revealing his masterpiece. "This is for when you're outnumbered. You just hold up your hand and say 'Stop!' and BOOM! Glitter cloud!" Walter said, his voice lowered in awe. "And the bad guys will leave you alone."

Wendy paused, then realized where her son's train of thought had led him. "Oh! Because glitter makes people happy?" Walter looked at her, brow furrowed. "Because the refracted light cause the enter chromaffin cells to release serotonin..." He saw his mother was not understanding. He sighed. "Yeah, glitter makes people happy." An idea popped into his head. "Let's try it out! Remember how you told me not to take apart your cell phone?" Wendy eyed her destroyed cell phone on her son's workshop table. "Not again! Come on. I..." Glitter exploded everywhere, covering mother and son in sparkles. Walter flashed a smile, his eye wide and expectant. "Still want to kill me?" There was a moment before Wendy cracked, smiling and bringing her son in close, rubbing his hair and causing a glitter shower. "No. Just the opposite." Walter has already begun spouting out ways to improve his gadget. "It worked! Next I want to add kitten visuals. No one can resist that combination!"

There was a brief buzz to static before police dispatch called in for multiple police officers including "Beckett, Wendy." "That's me, hon. Time for my shift." She kissed him on the forehead and headed for the door. "Be good for Gram, okay?" Walter grabbed a nearby backpack and the gadget and ran after his mom. "I'll come with you. I can finish this on the way. You won't even know I'm there..."

"What you need to do is get ready for school." Walter flopped in front in his mom, twirling the gadget in one hand absentmindedly."Ughhh, Mom, school's boring and the kids think I'm weird." "'Weird?' Hey, look at me." Wendy knelt down, facing her son. "What's wrong with weird? The world needs weird." Walter gave a slight smile. Taking the gadget from her son's hand, Wendy continued. "Listen, I'm out there keeping the neighborhood safe. But one day, your ideas... your gadgets are gonna keep the world safe. And everybody will wish they were as weird as you."

"You think?" Walter whispered. "I know." Wendy said, leaning in close. "Just promise me you will never give up." Walter saluted, "Promise." Smiling. Wendy outstretched her arms. "Good. Now give me a non-inflatable hug. Love you, partner," she said as they embraced. She pulled back and looked at Walter. "I'm promise I'll always have your back." Wendy then look his watch and slipped it onto her wrist. "Team Weird?" Walter smiled. "Team Weird.

14 years later, it was a snowy night in the mountains of Japan. Alongside one such mountain was a pagoda. The pagoda's four-sided stacked eaves rose three stories and lit the night sky. Two Yakuza guards the 'Japanese mafia' were patrolling... and whining to each other about the cold. "Man, I agree" A voice surprised them both. "It is cold!" The Yakuza guards turned their weapons on Special Agent Lance Sterling, the world's top superspy, dressed in his signature tuxedo. He raised his hand to his head in a mock salute to his perfect dark hair. "Hey, fellas. Konnichiwa. How you livin'?"

Both guards shock their weapons and began yelling in Japanese at once. "Whoa, okay, okay. Everybody good? Be chill like that snowman over there. See him? In just a minute, he's gonna be holding both your guns and we'll a be laughing. Then I'm gonna knock you both out."

The guards looked over at a snowmen that absolutely was not there a moment ago. They looked at each other, then to Agent Sterling, but Lance was gone. "Yoo-hoo." Lance called. He was standing by the snowman. In a flash, he whizzed to the guards and, with a flying chop, sent one guard's gun soaring into the snowman. A quick side kick to the other Yakuza and that guard's gun was in the snowman's other arm.

"Ha-ha! See? How fun was that?" Lance looked at the guards, then knocked their heads together and they fell. As he was stepping away, Lance heard a SPLAT and looked to find pigeons flying from the pagoda, and one had pooped on a guard's head.

Screwing up his face in disgust, Lance said, "Ugh, you did not deserve that. Rats with wings, I say." He then put on high-tech spy glasses, then activated his communicator and spoke into it. "I'm in position." Back in the control room, screens lit, up everywhere showing Lance's location: maps, infrared, POV visuals, everything to help guide the Agency's greatest asset as he carried out his mission.

"Whatcha got for me, Joyless?" Lance was the only person brave enough to call the director that to her face. "You know I hate it when you call me that," she quipped back. "That's what makes the job fun." Lance removed three buttons from his suit jacket and tossed them in the air to reveal they were tiny drones. The mini-aircraft buzzed around to send back a better image of Lance's surroundings.

"What is your situation?" Director Jenkins asked. "Just getting visual now." Something in the video feed from one of the drones caught on the director's eye. "Tighter on that one, ten o'clock." Using his high-tech spy glasses, Lance followed where she had guided him. With the touch of a button, he zoomed in on the image, revealing a massive mountain of a man, seated at a table, eating probably his fourth dinner of the day.

"Katsu Kimura," Lance sighed, recognizing him. "Everybody's favorite arms dealer." Through his communicator, Lance could hear Joyless's gasp, and he imagined her pointing at the screen. "There! That briefcase is your objective." Lance adjusted his goggles to zoom in tighter and saw a titanium briefcase on the table near Kimura. "Looks easy enough."

The director's voice was grave as she paced in the Control Room. "Inside is the M-9 Assassin, the first semi-autonomous attack drone. "As she spoke, images of the Assassin in action played on screens around the room and were beamed to Lance's goggles for him to see as well. "It's powered by atmospheric energy. Never shuts down. Never stops pursuing its target."

"So it's an unstoppable killer robot that thinks for itself. Awesome! Maybe we should make one of those." Lance said sarcastically. "We did." sighed the director. "That one is it. They stole it from our covert weapons lab." As Lance watched Kimura, one of his flying buttons was picking up on something else. Just then, Drone Three's feed lit up, the screen filled with Yakuza guards rushing the pagoda's exterior. The agent monitoring Drone Three spoke up. "Director Jenkins, uhhh, he's got incoming." She pointed to the screen. "I'm detecting seventy extra hostiles aroudn the perimeter."

Jenkins pinched her nose and squeezed her eyes closed. Tough calls like this were why they made her director. "Ugh. I don't want another mess like Kyrgyzstan." she muttered. She took another look at the screen before she called it. "Lance, listen." the superspy heard Director Jenkins say over his communicator. "You've got seventy Yakuza incoming. Stand down." A grin flashed on the ace spy's face. "That's better odds than I usually get. Now or never, Joy." "No, do not engage!" Director Jenkins commanded. "This time you need to wait for the backup team."

"Team?" Lance said, waving at one of the drones. "It's like you don't even know me. I fly solo." With that, all three drones returned to Lance's hand. Joy paled, afraid of what he as about to do, knowing he was going to anyway. "Wait! Lance, listen." But it was too late.

Lance had cut the feed from the drones and his communicator. The control room was filled with screens of nothing but snowy static. 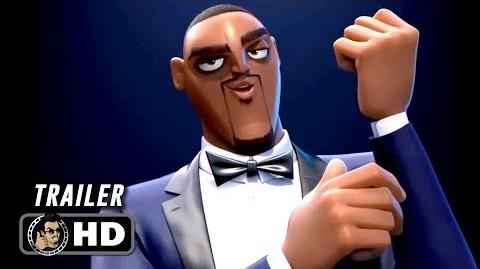 Spies in Disguise Agents on the Run