Surviving Sid is a 2008 American computer animated comedy short film directed by Galen T. Chu and Karen Disher and produced by Blue Sky Studios and 20th Century Fox Animation and distributed by HiT Entertainment, starring Sid the Sloth of Ice Age and a cameo appearance by Scrat. It is the third in the series of Ice Age short films, the first being Gone Nutty released with the Ice Age DVD in November 2002. The second being No Time For Nuts on the Ice Age: The Meltdown DVD in November 2006.

Unlike the first two Ice Age short films Surviving Sid focuses on Sid the Sloth and a small group of camping children. This is opposed to the first two shorts where Scrat was the protagonist.

Sid, the Sloth, takes a school of children out on a camping trip from home, only to find that in typical Sid style, he is not a very good guide and the camping trip he takes with him don't have a very good time. Scrat makes a small cameo appearance in the short, he has swallowed his nut and is struggling to keep it down, in true Scrat style he coughs it up and it is stolen from him. The camping trip leaves some of the children somewhat traumatised. Sid tries to pick a flower, but somehow this has led to a tree falling, which then hits a rock, which causes a chain reaction and hits a series of larger rocks, until eventually hitting a large iceberg. The iceberg then carves out a u-shaped valley, which Sid later names the Grand Canyon. Afterwards the kids get so annoyed with Sid that it ends with them tying him up. At the end of the short movie (20,000 years later in the present day) it shows a father and son beaver looking over the Grand Canyon with the son asking who made it. The father replies "a nature or a being or creature with infinite wisdom."

As of July 2009, it is also available as a free "Video Podcast" in the USA iTunes store, and on the PlayStation Network. 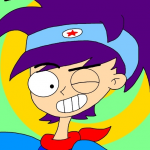