Umbrellacorn is a 2013 computer animated short film from Blue Sky Studios. It's about a lonely unicorn who has an umbrella instead of a horn. Unlike Blue Sky Studio's usual productions, the short's creator, Stephen P. Neary, animated the whole short himself. 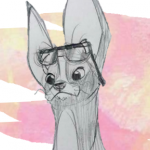