View source
watch 01:40
The Sandman Will Keep You Awake - The Loop
Do you like this video?
Play Sound

Tom Holland
Jarett Bruno (as a child)
Walter Beckett is an inventor and scientist that appears in Spies in Disguise.

He is voiced by Tom Holland as an adult, who has appeared in films such as The Impossible, The Current War, and In the Heart of the Sea, but is best known for playing Spider-Man in the MCU. His films include: Cherry, Onward, Dolittle, and the upcoming film, The Devil All the Time and Jarrett Bruno as a kid

While Walter lacks in social graces, he more than makes up for it in intellect and creativity. He provides himself with amazing gadgets he uses on his many globetrotting missions. His gadgets include the multi-pen, the inflatable hug, binder bubbles, kaleidoscope, Hypno star, snorpedo, scream team, the security blanket, kitty glitter, fifty shades of yay, and (of course) biodynamic concealment. He has a pigeon named Lovey (she is his roommate) and loves watching Hearts in Seoul. He also owns a stuffed unicorn named Unity. His mother's name is Wendy Beckett and he graduated from MIT at 15. He also figured out a way to edit human genomes in middle school. His dream is to go to Venice and feed the pigeons, and he makes friends with two pigeons named Jeff and Crazy Eyes. His nickname is Bond... Hydrogen Bond. He believes that there is always another way other than violence and also... glitter makes people happy.

Walter is the only child of single mum Wendy Beckett, a city police officer. Wendy died protecting civilians in 2009, leaving Walter in the care of his grandmother.

Growing up, Walter was a highly intelligent child, creating inventive and creative gadgets from a young age. He created gadgets for his mom, Wendy, to use on patrol. Walter disliked school, as the other kids often bullied him for being 'weird'. He also says school is boring, likely because of his high intelligence.

"and, invented a way to edit human genomes, in middleschool..." ― Eyes, on Walter's achievements

Walter Beckett continued his adventures into science throughout his early teen, inventing new technologies. Including Human Genome Editing while in middle school.

He also graduated from MIT at the age of 15. Walter probably joined the agency (H.T.U.V.) soon after graduating.

Walter has a stuffed animal, a unicorn, named Unity who he has had since childhood. Unity now assists him in his invention process.

The tech used by Walter to inadvertently turn Lance Sterling into a Pigeon. Bio-Dynamic Concealment uses a CRISPR-Cas9 genetic editor, in an ingestible formula, that resequences DNA on a molecular level. There are 3 phases of transformation. The first phase is chromothripsis, in which many genetic rearrangements take place. Though this phase has no physical changes, it is a severely painful experience for the subject, as Lance is seen to pass out from the pain. Phase 2 is epigenetic modulation. During this phase, the subjects' genetic 'switches' flip from human to pigeon, and some physical changes can be seen. The final phase is the most painful, and the body is flooded with endorphins to help combat this pain. This phase is when the majority of physical changes occur and is likely the reason why it is so painful. From the time of drinking the formula, there is approx. 1 min before the transformation is complete. Due to the formula needing a sample of example DNA from the target animal, it is likely the formula could be used with any animal DNA. It should also be noted that this formula changes the biological gender of the subject to the gender of the animal the example DNA was taken from.

The multi-pen looks like a regular multi ink pen, but Walter has built many unique and interesting gadgets within it. These include a freeze-ray, serious-string, a body numbing/liquifying zapper, and truth serum.

The inflatable hug is a personal protection device, first imagined by Walter when he was 6. It creates a 'pressurised pocket of safety' around the occupant, protecting them from explosions, falls from great heights, etc.

The binder bubbles gadget is a harmless gadget that shoots out bubbles that capture and hold missiles until they explode.

The collide-oscope is a grenade that blinds opponents with a distracting color show that looks like looking into a kaleidoscope.

It is a gadget that shoots out a security blanket which captures objects and envelopes them.

The Fifty Shades of Yay is a non-threatening weapon made out of gas to blind opponents. 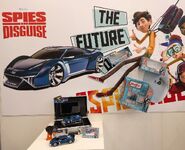 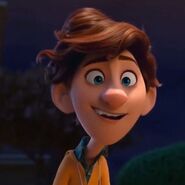 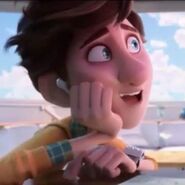 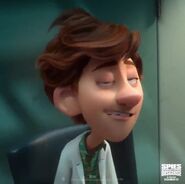 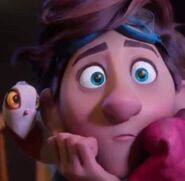 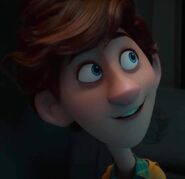 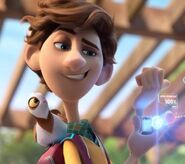 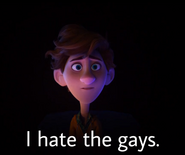 In the subtitles for this movie he said that he hated gay people, which isn't okay to say to ANYONE under ANY circumstance. 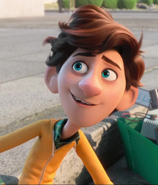